In my last post I described how I optimised my home heating with Home Assistant and then created virtual energy sensors to monitor my estimated gas usage from Home Assistant’s Energy Dashboard. In this post I’ll describe how I used the same strategy to monitor the real-time energy use of the majority of devices in my house without using any power meters. A big shout out to the amazing Powercalc integration for Home Assistant, which makes this a relatively simple process, with extremely powerful results.

My initial goal was to create an virtual energy sensor for my gas boiler, which could be monitored by the energy dashboard:

I first needed to create a virtual power meter:

The state of the above sensor will evaluate to zero if the boiler relay switch is off, or to the value of the input_number.combi_boiler_power_usage input helper if the boiler is on. Some note on the attributes defined above:

To turn the power sensor into a virtual energy meter,  I defined an “integration” sensor as follows:

I now had a working energy sensor:

Note the attributes device_class: energy and state_class: total, which make this sensor compatible with the Home Assistant’s energy management dashboard. I could now add the sensor to the energy dashboard as follows: 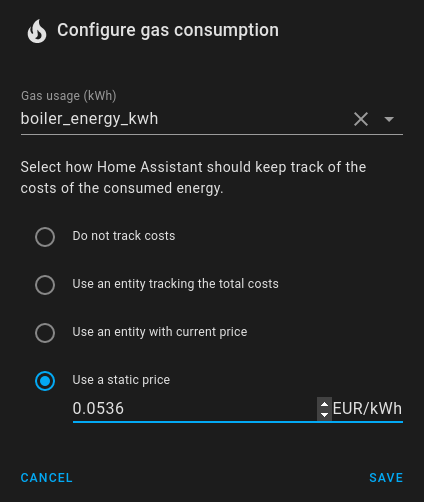 This approach can be generalized to create a virtual energy meter for anything you can estimate the current power of. The pattern is a power meter, followed by an energy meter:

My next mission was to create a new virtual sensor to represent the roughly fixed amount of gas we use heating domestic hot water each day. However, I realised that I could avoid creating all these sensors by hand, and instead use the Powercalc integration to create them for me.

Bram Gerritsen’s Powercalc integration automates the creation of the kind of virtual energy sensors I created above. It is especially powerful when it comes to lights, as it automatically recognises the device and model of popular smart lights and looks up its current state in a community-contributed lookup table to find a good estimate of its current power usage. In my case, it automatically detected every smart light in the house.

Powercalc not only makes it easy to estimate your lights, but it allows you to produce virtual energy meters for any device that Home Assistant knows the state of, such as relay switches, robot vacuums, media players, smart speakers, phones, cameras, and anything with an IP address on your network. Any dumb devices that are always on and have stable power usage can also be added in. With a bit of templating you could also represent dumb devices that operate on a predictable schedule.

The first step was to take stock of all the electrical devices in my house. I made a spreadsheet, and gave each device a category:

I came up with 69 devices, only 9 of which Powercalc wouldn’t work for.

I then worked through each of the HA-integrated devices to identify a sensor in HA that represented the state of that device. I also came up with estimates of power usage of each device by combining internet research with some empirical testing with a power meter, and a little guesswork.

Here is the final spreadsheet:

Before proceeding to create a Powercalc configuration, I reviewed the devices in the spreadsheet to make sure each of them had an appropriate Home Assistant sensor to work with.

I found a few devices that were always on,  but didn’t have any representation in Home Assistant. Powercalc allows you to deal with these using the fixed_daily_energy directive, but this only produces an energy sensor, and does not produce a power sensor. I wanted to be able to see a real-time estimate of total current power consumption, including these devices.  To work around this, I created template sensors in Home Assistant to represent the always-on state of each of these devices. I needed to create a template sensor for each device, because each entity_id configured in Powercalc must be unique.

For convenience, I added a template sensor to do a better job of giving the current state of the robot vacuum:

I found that although my Synology NAS was integrated with Home Assistant, there wasn’t a binary sensor to tell if it is currently powered on or not. I fixed this with a ping sensor.

I did the same thing for my main workstation, and used the state of the resulting binary_sensor to represent the power usage of my computer, monitor, dock and associated equipment.

Here is my final powercalc.yaml file:

I created a new dashboard to view real-time power consumption: 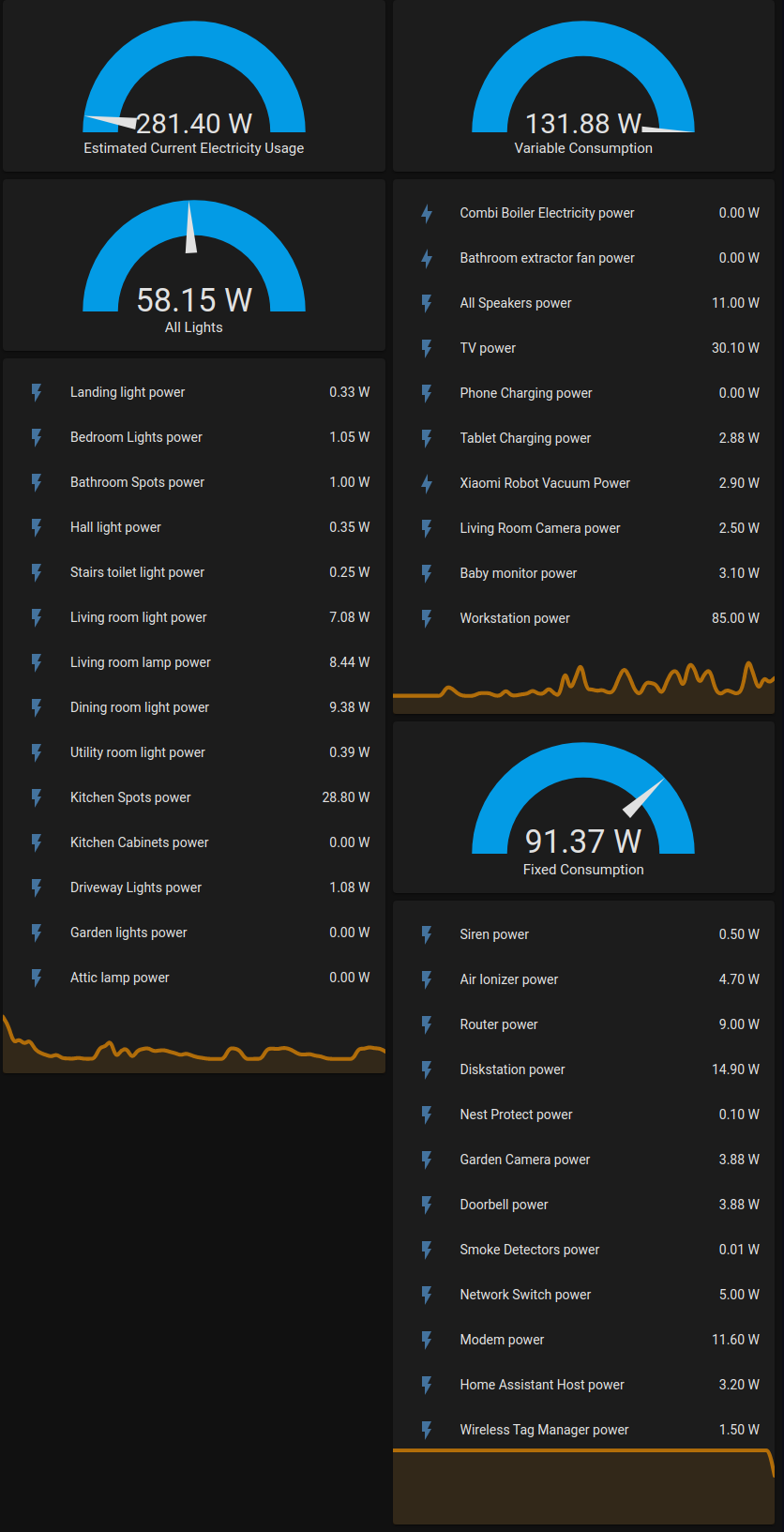 I also added the top-level Powercalc’s summary sensor into the energy dashboard, along with pricing info from my electricity tariff, and a couple of Powercalc sub-groups as “individual devices”: 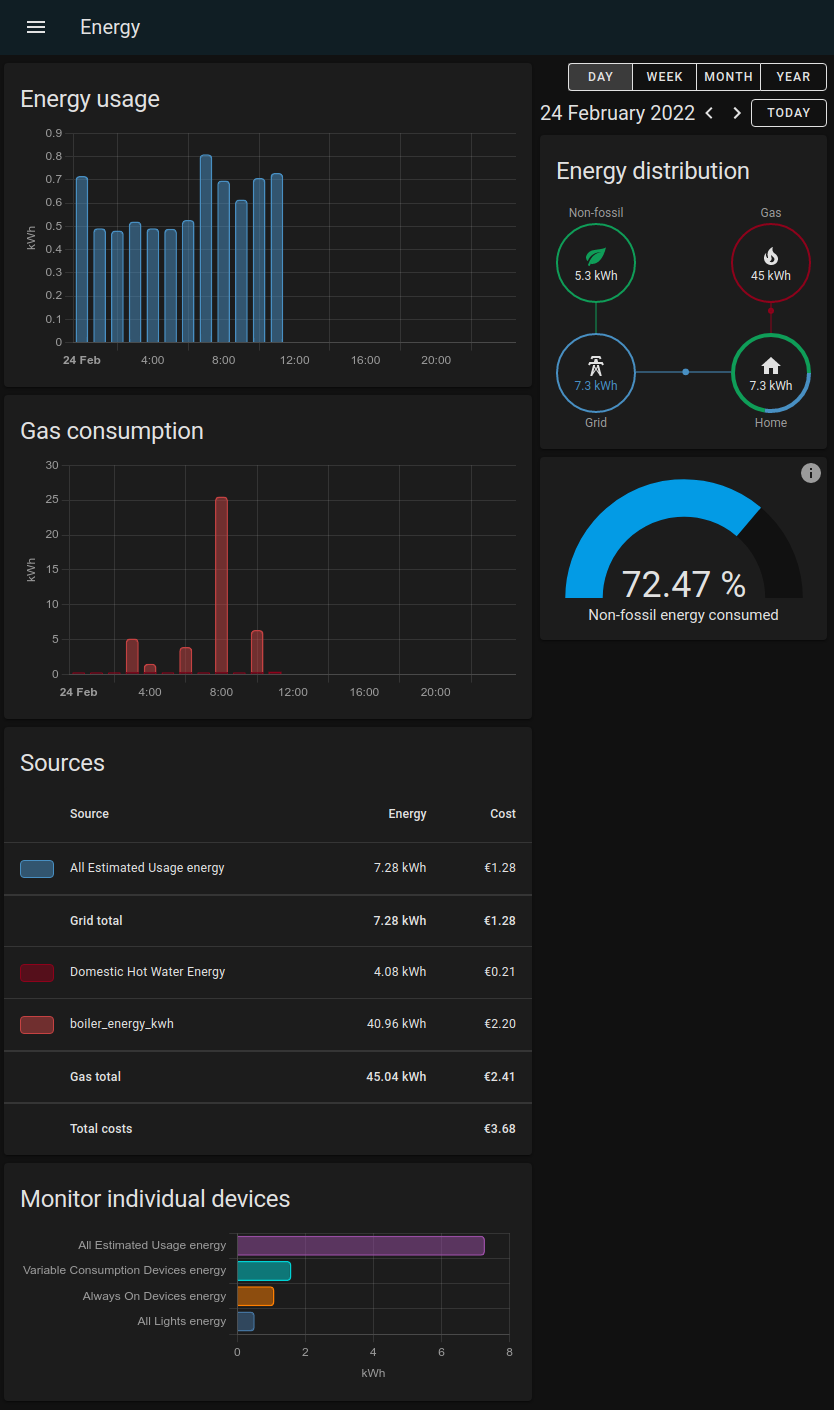 Although I now have detailed power consumption estimates for 60 out of 69 devices in my house, the remaining 9 big dumb appliances are probably the biggest energy hogs. To measure them I need to install some power meters. After some research I have selected the Shelly EM with two clamps, and will be installing this in my consumer unit / fuse box / breaker box to measure power usage at the main 63A switch using a 120A CT clamp, and power usage on my 32A oven/hob circuit using a 50A CT clamp. I will be supplementing this with a handful of Shelly Plus 1PM and Shelly 2PM Plus relays to measure power at the other large appliances.