The budget is coming early this year, and rumour has it that Minister Noonan will once again increase the Capital Gains Tax. CGT has been increased four times since 2008, and now stands at 33%, one of the highest rates in the world. Each increase has been a shocking blow to Irish entrepreneurs, who have been trying to battle poor economic conditions and build businesses, creating new jobs and indigenous growth.

The CGT cheques mailed to the revenue are now 65% bigger than five years ago (up 13% percentage points from 20%). Ironically, these successive increases have been accompanied by various confused policies supposed to support startups. One example is the three year corporation tax holiday given to startups, announced in tandem with the first of the CGT bumps. Sounds good, but most startups reinvest revenues into hiring and growth, leaving no profits behind to benefit from this “relief”. It seems that our policy makers aren’t very familiar with life from a startup entrepreneur’s perspective.

A startup founder works hard to create a high-growth company that will be of strategic importance to larger businesses. He or she only expects to make real money when one of these larger businesses acquires the startup by buying all the shares in the startup. Until this happens, founders draw the lowest salaries they can comfortably survive on. If you asked most Irish entrepreneurs what they pay themselves, the most frequent answer would be €32,800. Every Euro above this mark gets taxed at the 41% income tax rate plus 7% universal social charge plus 4% PRSI, meaning that 52 cent out of every Euro goes to the tax man. Instead, startup entrepreneurs tend to put the money to more constructive uses, for example, by employing a new member of staff.

Startup founders are typically smart, educated and experienced - most could earn a much greater salary in a multinational company. Instead, they hope to make this lost salary back in the long run, for example by selling a million Euro of shares every ten years or so. Although this sounds like a lot of money to receive in one lump sum, it happens infrequently, if at all. Even such a large sum often translates into a lower annual income than the entrepreneur could earn in a more traditional job. With an uncertain salary, no career progression and no job security, this infrequent cash windfall is the only income that an entrepreneur looks forward to. The successive increases to CGT that we’ve suffered over the last five years directly target this entrepreneurial income. It sends a powerfully negative signal to every entrepreneur, rewarding those who fight to create employment with ever higher taxes.

Worst Country to Sell Your Company

Ireland is now one of the worst countries in the world to sell a company in. In Europe we are at the back of the pack, trailed only by France and Denmark. Many countries, such as Belgium and the Netherlands have no Capital Gains Tax at all, choosing to encourage investment and entrepreneurialism rather than tax it. 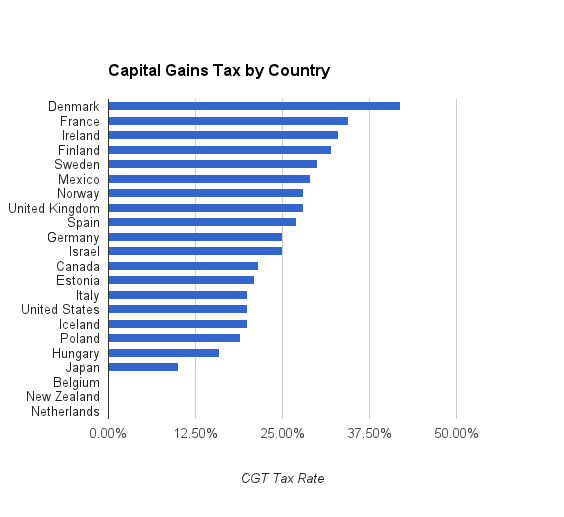 To put it bluntly, Capital Gains Tax does what it says on the tin: it taxes capital. What is taxed is discouraged. Every extra percentage point is one more reason for an entrepreneur not to start in Ireland, to return to an industry job or emigrate to a more enlightened country. Every increase translates into more startups that don’t get funded, with investors seeking ever-higher returns to make up for the rocketing taxes being imposed on them. This is not a new view. Many economists have long argued that raising capital gains tax leads to lower growth, resulting in lower overall tax income. This should not be confused with giving tax breaks to the rich: other taxes do a better job of targeting the very wealthy. There’s an important difference between taxing the wealthy and taxing the creation of wealth. The former is fair, and the latter is self-destructive. Simply put, Capital Gains Tax is a tax on entrepreneurialism, the only activity that can save our economy.

Good op-ed on CGT by @seanblanchfield in @sundaybusiness; wealth creation should be low tax on high volumes or exempt for entrepreneurship

Thankfully, there is a simple fix, one that should be palatable to the Minister, and which has been proven elsewhere. CGT exemptions already exist, such as on the sale of your main residence or if you win the Lotto. In 2010, the United Kingdom brought in one more exemption, called “Entrepreneurs’ Relief”. This scheme provides a £10 million lifetime capital gains allowance that will be taxed at only 10%, with some simple eligibility limitations to exclusively target entrepreneurs (you must actually have worked in the company and own at least 5% of it). As with the amazing Seed Enterprise Investment Scheme, the UK is leading the way in terms of promoting innovation. On the 15th October, Minister Noonan has a chance to genuinely support Irish entrepreneurs and startups, boosting the entire ecosystem with one cheap and simple measure. Let’s introduce our own “Entrepreneurs’ Relief” program, granting low Capital Gains Tax on the first €10M a person makes by directly creating or investing in startups. It will make little direct difference to the exchequer, but will motivate investors and entrepreneurs alike to stay in Ireland and dedicate themselves to building new companies, jobs and wealth.

Sean Blanchfield is chief executive of PageFair, co-founder of Demonware and organiser of the Techpreneurs startup CEO community. You can follow him on Twitter @seanblanchfield.

Thanks for highlighting this issue Sean. The absence of a true entrepreneurial voice among the leadership of our country is leading to some daft decisions. Encourage start-up activity through the seed funds but take away all the upside by increasing CGT. I doubt that Britain’s startup strategy is being shaped by teachers and trade unionists.

For personal wealth creation, becoming an entrepreneur is a really bad decision. If you want to get rich in Ireland, take a job in the public sector, ideally as a doctor. It is no surprise that our smartest people end up in healthcare.

We talk a lot about supporting entrepreneurship but decisions like this highlights how superficial that support really is.

Hard to believe that CGT has increased to such penal levels in Ireland.